WHEN YOUR KIDS DON’T WANT TO GROW UP 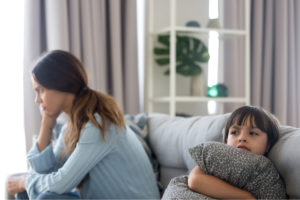 Of course, not all children appreciate being “taken care of” in that fashion: the stronger-willed ones rebel early on. But whatever your kids’ current ages, you have a problem in the making if you find yourself regularly doing for them what they could do themselves.

If you don’t want to still be making their beds when they’re thirty, here are two key rules for gently prodding towards independence.

1. Avoid the “Easier to Do It Myself” Trap

Most kids are eager for the challenge of new-to-them jobs—and too often, we squelch their efforts with “You’re too young. … You’re too slow. … You’re making a mess.” Then, a couple of years later, we complain because they’re letting us do everything. (The real manipulators agree to help and then do a deliberately slow-and-sloppy job, knowing we’ll soon get exasperated and take things back into our own hands.)

Wherever possible, let kids try any work project and improve by trial and error, without your jumping in to “help.” If the big job really is too dangerous for them, let them do a “starter-step” share (e. g., handing you nails or watching that the boards go on straight). If you want to encourage participation where they’re already reluctant, find a way to make it more challenging (e. g., including higher shelves with the area to be dusted). And however imperfect the result, refrain from improving on it while the kids are watching!

The literary character Tom Sawyer was so successful at convincing his friends that painting the fence was an honor and a privilege, they actually paid him to let them take over most of the work. While it would be unethical (and probably unsuccessful) to fake enthusiasm in the hope of tempting your kids to volunteer for jobs you hate, you can’t expect them to appreciate any job if your example says work is a curse. Instead of complaining about your own responsibilities or supervisors, focus on the larger mission and the satisfaction of a job well done.

Another rule of encouraging a positive attitude toward work: make a whole-family project of dividing up the chores, and give the kids their full say. When allowed to help with the planning, they’ll feel real responsibility for following through. (If anyone still procrastinates, arrange things so the delay obviously inconveniences him: a growling stomach and the invisible pressure of everyone else waiting for dinner are excellent motivators for tardy table-setters.)

Finally, treat “growing up” as a lifelong privilege. When you make a habit of regularly improving your skills and trying new responsibilities, kids naturally imitate your example. Eventually, they’ll grow up to be better than dependents: they’ll become your lifelong admirers, friends, and helpers!